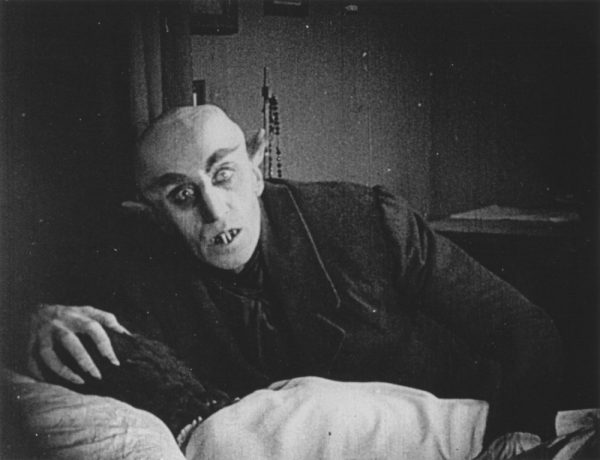 Nosferatu: A Symphony of Horror (German: Nosferatu, eine Symphonie des Grauens) is a 1922 silent German Expressionist horror film directed by F. W. Murnau and starring Max Schreck as Count Orlok, a vampire with an interest in both a new residence and the wife (Greta Schröder) of his estate agent (Gustav von Wangenheim). The film is an unauthorized and unofficial adaptation of Bram Stoker’s 1897 novel Dracula. Various names and other details were changed from the novel, including Count Dracula being renamed Count Orlok.

The next morning, Hutter takes a coach to a high mountain pass, but the coachman declines to take him any further than the bridge as nightfall is approaching. Another coach appears after Hutter crosses the bridge and its coachman (Orlok in disguise) gestures for him to climb aboard. Hutter is welcomed at a castle by Count Orlok. When Hutter is eating dinner and accidentally cuts his thumb, Orlok tries to suck the blood out, but his repulsed guest pulls his hand away.

An iconic scene of the shadow of Count Orlok climbing up a staircase
Hutter wakes up to a deserted castle the morning after and notices fresh punctures on his neck which, in a letter he sends by courier on horseback to be delivered to his wife, he attributes to mosquitoes. That night, Orlok signs the documents to purchase the house across from Hutter’s own home in Wisborg and notices a photo of Hutter’s wife, remarking that she has a “lovely neck.”

Reading a book about vampires that he took from the local inn, Hutter starts to suspect that Orlok is a vampire. He cowers in his room as midnight approaches, with no way to bar the door. The door opens by itself and Orlok enters, and Hutter hides under the bed covers and falls unconscious. Meanwhile, his wife awakens from her sleep, and in a trance walks towards her balcony and onto the railing. Alarmed, Harding shouts Ellen’s name and she faints while he asks for a doctor. After the doctor arrives, she shouts Hutter’s name, apparently able to see Orlok in his castle threatening her unconscious husband.

The next day, Hutter explores the castle. In its crypt, he finds the coffin in which Orlok is resting dormant. Hutter becomes horrified and dashes back to his room. Hours later from the window, he sees Orlok piling up coffins on a coach and climbing into the last one before the coach departs. Hutter escapes the castle through the window, but is knocked unconscious by the fall and awakens in a hospital.

After recovering, Hutter hurries home. Meanwhile, the coffins are shipped down river on a raft. They are transferred to a schooner, but not before one is opened by the crew, revealing a multitude of rats. Sailors on the ship fall ill, and soon all but the captain and first mate are dead. The first mate goes below to destroy the coffins, but Orlok awakens and the horrified sailor jumps into the sea. When the ship arrives in Wisborg, Orlok leaves unobserved, carrying one of his coffins, and moves into the house he purchased. The next morning, when the ship is inspected, the captain is found dead. The doctors conclude that the plague is to blame. The town is stricken with panic, and people are warned to stay indoors.

There are many deaths in the town, which are blamed on the plague. Ellen reads the book Hutter found, which claims that a vampire can be defeated if a pure-hearted woman distracts the vampire with her beauty. She opens her window to invite Orlok in, but faints. Hutter revives her, and she sends him to fetch Professor Bulwer, a physician. After he leaves, Orlok enters and drinks her blood as the sun begins to rise. Knock, who has been committed after having murdered the warden of a psychiatric ward, senses the threat to Orlok, but cannot escape his cell to warn him. A rooster crows, and the sunlight causes Orlok to vanish in a puff of smoke. Ellen lives just long enough to be embraced by her grief-stricken husband. Count Orlok’s ruined castle in the Carpathian Mountains is then shown. 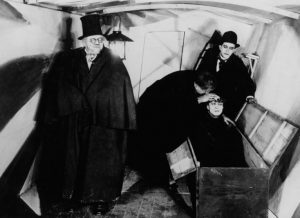 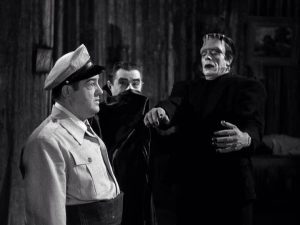 The Wolf Man tries to warn a dimwitted porter that Dracula wants his brain for Frankenstein monster’s body.
Larry Talbot makes an urgent phone call to a railway station, where Chick Young and Wilbur Grey work as baggage clerks. Talbot tries to warn Wilbur of a shipment due to arrive for “McDougal’s House Of Horrors”. However, before he finishes, the moon rises and Talbot transforms into a werewolf, causing Wilbur to think the call is a prank. Meanwhile, McDougal demands the crates be personally delivered to his wax museum.