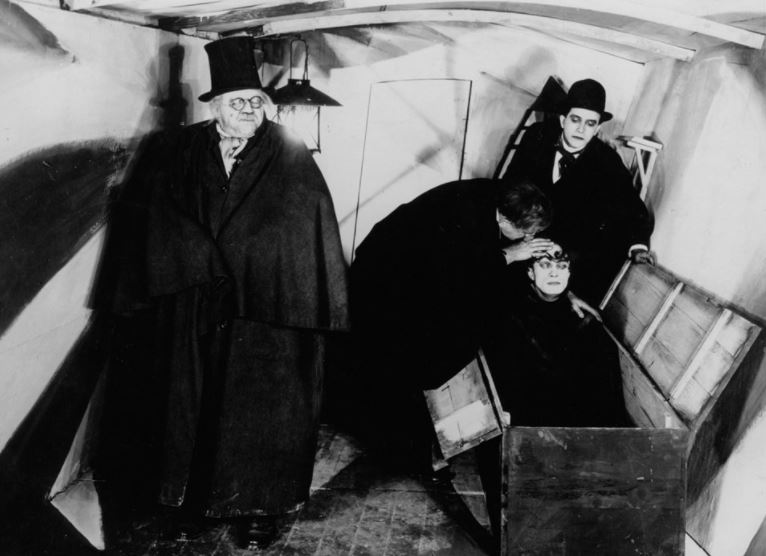 The Cabinet of Dr. Caligari (German: Das Cabinet des Dr. Caligari) is a 1920 German silent horror film, directed by Robert Wiene and written by Hans Janowitz and Carl Mayer. Considered the quintessential work of German Expressionist cinema, it tells the story of an insane hypnotist (Werner Krauss) who uses a somnambulist (Conrad Veidt) to commit murders. The film features a dark and twisted visual style, with sharp-pointed forms, oblique and curving lines, structures and landscapes that lean and twist in unusual angles, and shadows and streaks of light painted directly onto the sets.

The next morning, Francis and Alan visit Caligari’s spectacle, where he opens a coffin-like box to reveal the sleeping Cesare. On Caligari’s order, Cesare awakens and answers questions from the audience. Despite Francis’s protests, Alan asks, “How long shall I live?” To Alan’s horror, Cesare answers, “The time is short. You die at dawn!” Later that night, a figure breaks into Alan’s home and stabs him to death in his bed. A grief-stricken Francis investigates Alan’s murder with help from Jane and her father, Dr. Olsen (Rudolf Lettinger), who obtains police authorization to investigate the somnambulist. That night, the police apprehend a criminal in possession of a knife (Rudolf Klein-Rogge) who is caught attempting to murder an elderly woman. When questioned by Francis and Dr. Olson, the criminal confesses he tried to kill the elderly woman, but denies any part in the two previous deaths; he was merely taking advantage of the situation to divert blame onto the real murderer.

At night, Francis spies on Caligari and observes what appears to be Cesare sleeping in his box. However, the real Cesare sneaks into Jane’s home as she sleeps. He raises a knife to stab her, but instead abducts her after a struggle, dragging her through the window onto the street. Chased by an angry mob, Cesare eventually drops Jane and flees; he soon collapses and dies. Francis also confirms that the caught criminal has been locked away and could not have been the attacker. Francis and the police investigate Caligari’s sideshow and realize that the “Cesare” sleeping in the box is only a dummy. Caligari escapes in the confusion. Francis follows and sees Caligari go through the entrance of an insane asylum.

Upon further investigation, Francis is shocked to learn that Caligari is the asylum’s director. With help from the asylum staff, Francis studies the director’s records and diary while the director is sleeping. The writings reveal his obsession with the story of an 11th-century monk named Caligari, who used a somnambulist named Cesare to commit murders in northern Italian towns. The director, attempting to understand the earlier Caligari, experiments on a somnambulist admitted to the asylum, who becomes his Cesare. The director screams, “I must become Caligari!” Francis and the doctors call the police to Caligari’s office, where they show him Cesare’s corpse. Caligari then attacks one of the staff. He is subdued, restrained in a straitjacket, and becomes an inmate in his own asylum.

The narrative returns to the present, where Francis concludes his story. In a twist ending, Francis is depicted as an asylum inmate. Jane and Cesare are patients as well; Jane believes she is a queen, while Cesare is not a somnambulist but awake, quiet, and not visibly dangerous. The man Francis refers to as “Dr. Caligari” is the asylum director. Francis attacks him and is restrained in a straitjacket, then placed in the same cell where Caligari was confined in Francis’s story. The director announces that, now that he understands Francis’s delusion, he is confident he can cure him. 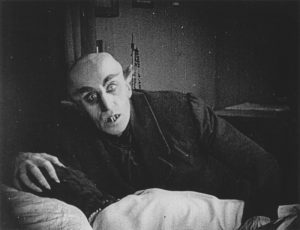